Ever since the advent of virtual reality, there have been many attempts in improving the immersive experience by adding new devices to the already existing long list of devices. The most minimal experience the user has, apart from the visual, is the vibrations in the hand-held controller. Very few devices are available that can bring any more experience than these. More engaging immersive experiences are possible when full sensory systems are utilized apart from the existing visual and sound sensors. With respect to the haptic system, however, physical feedback has been provided primarily with handheld tactile experiences or vibration-based designs, largely ignoring both pressure receptors and the full upper-body area as conduits for expressing meaning that is consistent with sight and sound. The potential for immersion along these dimensions is extended with the Force Jacket.

The force jacket is a novel haptic wearable system of various pneumatically-actuated airbags and force sensors that provides precisely directed force and high-frequency vibrations against the upper body in correspondence with visual media. Airbag, pneumatic hardware and other subsequent devices' location are appropriately deployed in the jacket to define full-torso, pressure and vibration-based feel effects such as punch, hug, and snake moving across the body. Force jacket can create more compelling and immersive experiences.

The haptic Jacket consists of 26 air compartments each equipped with force sensitive resistors. Air compartments can be activated for pressures, for vibrotactile feedback or both. These compartments inflate to exert the force on the body relative to the force sensitive resistors. A compressor supplies air to each compartment through individually controlled solenoid valves. A vacuum pump, also connected to the bags via solenoids, allows for quick air removal. The actuation of the airbags is controlled by three Teensy 3.6 microcontrollers. Jacket's inflation parameters like inflation speed, force, duration is specified using the haptic effect editor. The motion interface is used to sequentially inflate compartments to simulate motion across the body. The intention for the overall system is to present a novel haptic embodied experience by means of a prototype of multi-area pneumatic force feedback. 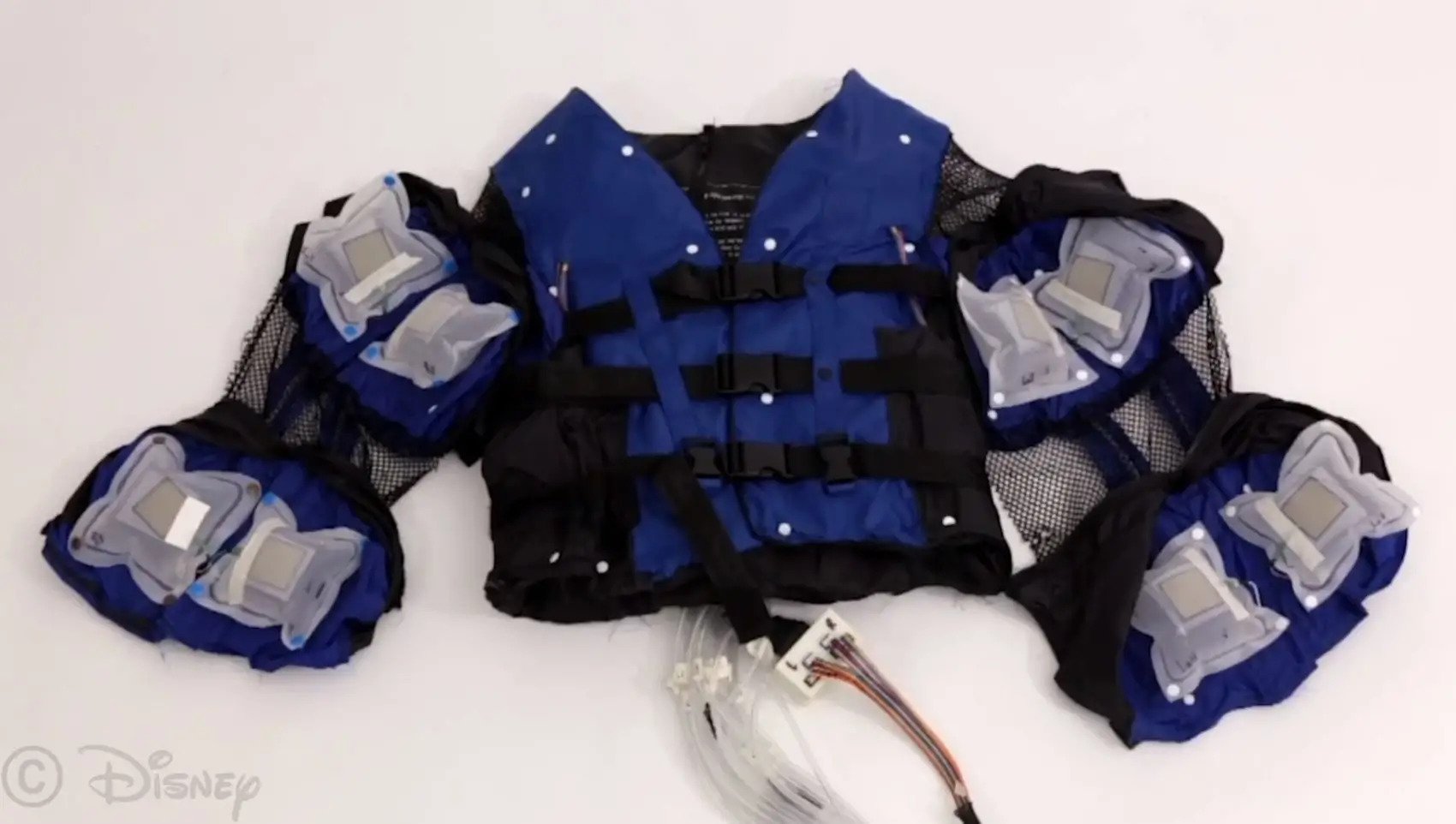 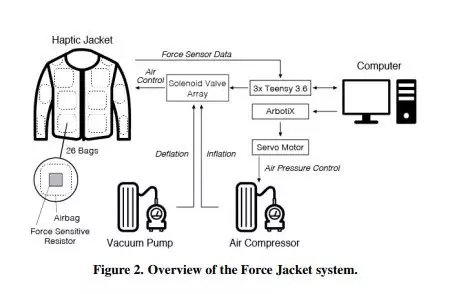 The haptic wearable was designed as a vest with adjustable sleeves to comfortably fit a wide range of user body types with varying heights and weights. The vest portion of the Jacket was a re-purposed life vest with the inner flotation foam removed and replaced with air compartments. Jacket sleeves were created using a combination of ripstop nylon and mesh materials. Velcro was attached to the arms and body of the Jacket to ensure secure fit on users. The Jacket with all tubing and air compartments attached weighed about 5 lbs.

Twenty-six airbags were installed throughout the Jacket. This density was enough to implement the sense of motion across the upper-body from one bag to another, while also ensuring that the jacket tubing was not too bulky. The airbag’s allocation: six air compartments on the front of the body, six on the back of the body, two on either side of the body, and four on each arm. Each air compartment was made from a 0.015" thick polyurethane film and fabricated using a custom built three-axis CNC heat-sealing machine, . Zippers were installed inside of the wearable to allow for easy access to all airbags. A 1.5"x1.5" square force sensitive resistor (FSR) was placed in a pocket on each of the airbags on the inside of the jacket facing the body surface.

A basic control algorithm that was programmed onto Teensy 3.6 microcontrollers controlled each airbag to reach target force [N] that would be dynamically adjusted from other software on a computer. When the actual force detected from the FSR on the bag was lower than the target force, it would inflate, and vice versa. A target range was defined to be 0.5 N as an offset, so that the system held the air for the bags if the FSR values were within the target range. Additionally, because the force sensor value from FSRs can dynamically change when subject’s breath or move their body, the control algorithm was designed not to inflate/deflate when target force was not being updated from the computer. The range of force values applied to the body was set to be between 0 - 9.0N. As the minimum force that FSR could detect was 0.3N, the actual range of the force the system can control is higher than 0.3N.

This control system was designed in the way that computer software sends a frequency value to generate fluttering effects. When each Teensy received specific frequency values for airbags, the Teensy switches the corresponding solenoid valves with the target frequency in three different ways depending on the target force and actual force value from the FSR; switch between Inflate and Hold when the bag is inflating to increase force, Inflate and Deflate when the bag is in target range, and Hold and Deflate when decreasing the force. The solenoid valves used allowed the system to create a fluttering effect up to 40Hz.

The feel effect (FE) is an explicit pairing between a meaningful linguistic phrase and a rendered haptic pattern. The range of possible feel effects that can be produced by the Jacket depends only on the pneumatic properties of the wearable. To that end, a Haptic Effect Editor was developed to easily create and control haptic feedback sequences by generating various combinations of actions in the Jacket.

The Haptic Effect Editor comprises two distinct GUIs, a Simple Editor and a Motion Editor, both equipped with multiple sliders to control airbag inflation parameters. Both editors operate in two effect modes: Vibration Mode (where the fluttering effect of the system is utilized to operate analogously to a vibrotactile motor) and Force Mode (where a force/pressure-based stimulus is applied to the body by inflating and deflating the bag).

The Motion Editor allows designers to create the sense of an event moving over the body. When designers select start and end points with a specific path speed, a corresponding inflation/deflation pattern will move across the body along the target line depicted in the GUI. Depending on the setting of a parameter for effect dispersion, bags will inflate around those on that target line. The target force for each airbag is inversely related to distance between bag and the target point. The maximum distance affected adjacent to the line is measured by a Spread Distance variable.
In addition to the Inflation Pressure [psi] and Target Force [N], the following parameters can be adjusted in the Motion Editor:

Initial study of the jacket was done to determine users' ability to perceive the location and pressure magnitude of the various inflatable compartments in the haptic pneumatic wearable. Study was done on users different age group and genders. The study revealed that there was a tendency to feel the lower arm location toward the wrist and Shoulder locations were biased toward the upper back rather than centered on top of the shoulders. The upper side was also sensitive to pressure relative to other areas, possibly because the inflation was opposed by the rib bones. the extent of the sensitivity differences observed here reflect the natural perceptual channel, the differential responses to pneumatic stimulation in various parts of the body will simply mimic what is felt in situations of everyday contact. To compensate for the perceptual displacement of the lower arm toward the wrist, the corresponding bag should be moved by a commensurate amount toward the elbow.

Another study was conducted on the different meaningful feel effects that can be produced using the jacket. With the editing controls it is possible to define any combination of parameter settings that the Jacket can produce. A desired feel effect is designated by a language phrase and an initial set of parameter values. Fourteen feel effects (FEs) were chosen as a target vocabulary for the study, comprising examples from six families: Precipitation, Enclosure, Pulse, Impact, Motion, and Motor. Within these families we chose some FEs that name extremes within the haptic-semantic dimension ("Light Rain vs. Heavy Rain", "Tap" vs. "Punch", etc.), and allow for direct comparison with prior work. The remaining FEs were chosen to explore different types of novel pneumatic haptics.

Participants reported greatest liking for the "Motorcycle Vibration" and "Snake Crawling" effects. Both effects also fell within the top five highest goodness ratings, with the "Motorcycle Vibration" effect being rated most realistically created. The "Heartbeat" effects were also very well liked; however, the rated realism of the calm heartbeat was high, and the racing heartbeat was low.

"Punch", "Hand Tap" and "Snow Ball hit" were among effects rated lowest in goodness and liked least. Participants consistently chose the highest inflation pressure levels for these three effects, suggesting that maximum impact speed is desired. The Force Jacket is not yet necessarily suitable for quick impacts without further adjustments to the system such as a stronger air compressor and control algorithm. A stronger impact force level was chosen for "Snowball" and "Punch," while the lowest was desired for "Tap," which is consistent with physical definitions of these effects. 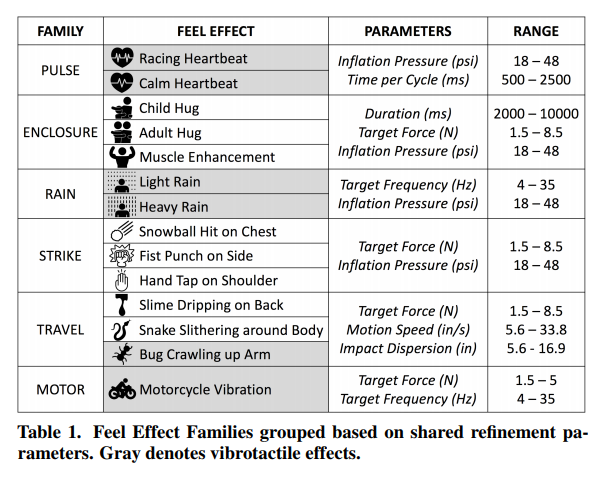 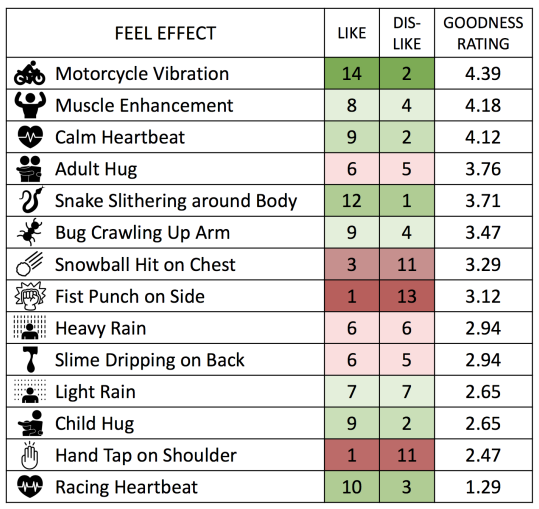 PneuHaptic is an armband-shaped haptic interface with an array of small airbags for providing haptic feedback.
Frozen Suit is a full-body haptic interface which hardens the joints on the limbs with a jamming technique in order to create an experience of a frozen body in VR games.
Electro Muscle Stimulation directly stimulates muscles with electric impulses to elicit muscle contraction, thus activating body motion. This was technique introduced to elicit a sensation of touching virtual object. Unlimited Hand is a commercial mobile device worn on the wrist for this same purpose.